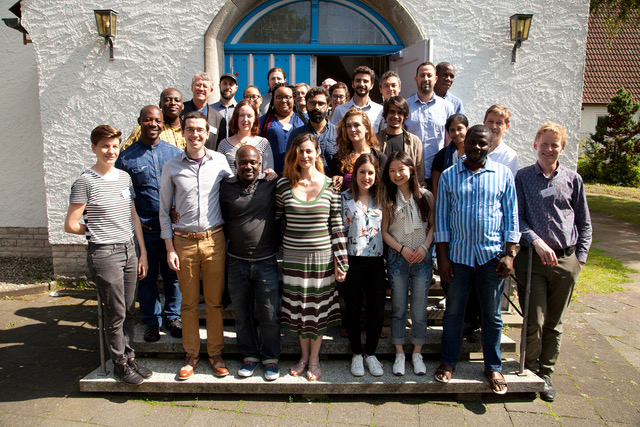 The 11th international doctoral workshop brought together young scholars from all over the world to share their ongoing researches and to receive feedbacks in order to shape their works. In all 13 doctoral students participated together with a number of senior scholars such as Philip V. Bohlman ((University of Chicago, USA & HMTMH, Germany), Raimund Vogels (HMTMH, CWM, Germany), Michael Fuhr (CWM, Germany) Eric Debrah Otchere (University of Cape Coast, Ghana), Cornelia Gruber (HMTMH, Germany) and Roland Radano (University of Wisconsin–Madison, USA; The American Academy Berlin).

The conference opened with a pre-workshop by Philip Bohman titled “New Voices, New Ethnomusicologies” where the issues raised centered on the question of voices and listening, nationalism (the oldest idea for studying music), and migration among other themes. Finally, we discussed about how walls keep voices out and the general aesthetics of the wall drawing paradoxes and parallels.

In all the 13 presentations by the student participants, covering diverse areas of research, the central themes that run through them was what I term ‘The Development Rhetoric’. This cut across the social and cultural dichotomy. It was interesting to see how all the research interests of the participants touched on social issues, cultural issues and the role of policy, economics and political arguments towards development. The greater emphasis, however, was on the role of music in addressing these issues towards development in the contemporary world.

One of the things the students enjoyed was the ample time that was allocated for each presentation. The peer review was an additional advantage which the students also commended. However, they suggested that going forward, peer reviewers are given 20 minutes to rather ask questions and not to summarize the entire work again.

The conference ended with a keynote lecture delivered by Ronald Radano captioned: The African Sound Object and the Colonial Past. His lecture focused on human and musical extractions from the colonial past where he traced the origins of Negro music from this colonial past. One striking story about the African colonial past that has come up strongly in recent years is the claim that African ancestors were also captured in sound objects through recordings.

The last days brought together MA students of the Centre for World Music and the participants for the doctoral workshop to be engaged in practical music and dance workshop which was led by Eric Debrah Otchere and Eyram Fiagbedzi. They introduced the participants to basic dance movements and songs from Ghana. We had the privilege to showcase what we learnt during the dance workshop at the Mittsommernacht Festival that took place on the cultural campus of the University of Hildesheim on the 22nd of June, 2019. The doctoral workshop gave me the opportunity to network and share ideas with fellow students from the global north regarding how they are approaching their doctoral researches.