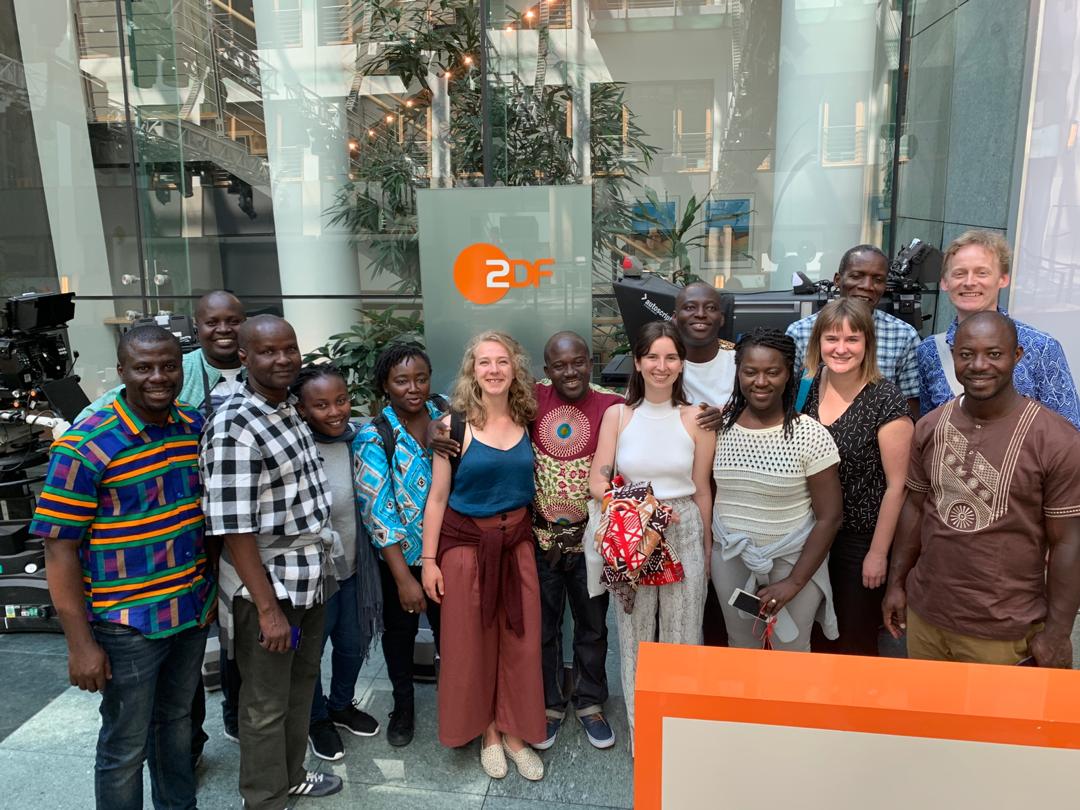 The excursion to Berlin was part of the academic exchange program of the SDG Graduate School in Hildesheim, Germany.

One highlight of the first day of the excursion was a guided tour of the ZDF, the second public television channel of the Federal Republic of Germany. On arrival at the ZDF, the group was warmly received by a designated guide Anne Christine who took the group round the different production units of the facility. Besides explaining role distribution and disciplines along the TV production chain, the visitors were also given insights into the technical and operational processes in the video, sound and light studios and how they worked in synchrony to produce news feeds, TV programs and live events. Towards the end of the guided tour, we were joined by Matthias Hügele, one of the officials of ZDF and a resource person of during the Workshop V of the Graduate School held in Abuja. After a series of warm accolades, a question and answer session followed at the ZDF café; through which exercise we were given further insights into the organigram, socio-political role, and economics of the ZDF.  In the evening we were invited to participate as part of a live audience in the recording of a cultural TV talk show “Aspekte”. This was a talk show that analyzed trending issues in the cultural scene in Germany. This episode of the talk show featured a writer and a musician as guests. Although the show was in German, the highly visual and interactive nature of its elements gave the English speaking guests a rough idea of what was being said, and most of them by this had their first experience of how a talk show is recorded or produced live.

The second day kicked off with a ship cruise from the edge of the remnants of the former Berlin wall around the Mercedes Platz, East part of the City, down to the central administrative area. This leisurely cruise took about two hours. After hopping off the group walked to the Reichstag building where a touristic visit had been booked several weeks ahead. The visit at the Reichstag was a breathtaking experience for the students, especially with the mixture of classical architecture for the outer walls and the futuristic architecture for the inside and the roof. Spiraling up the dome at the top of the building, the students were able to get a 360-degree view of Berlin city.

In the afternoon, a guided tour led by Mboro Mnyanka Sururu founder of Berlin Postkolonial, a Non-Governmental Organization focused on post colonialism in Germany took place. The first stop over was at the Ermelerhaus Hotel, owned by a company which was set up in the 17th century specifically to trade in slaves. What the professor pointed out as shocking and abhorrent was the sculpted frame above the door of this hotel that proudly showed the slave triangle that built the riches of this company. The professor then led the group through several streets of Berlin city that bore names highly related to and indicative of the unrepentant nature of Germany vis-a-vis her colonial past and atrocities committed in former colonies. He was particularly bitter about the German governments lukewarm attitude towards demands to repatriate thousands of cultural artifacts as well as human remains looted and brought to Germany by colonial officers. The tour ended at Wilhelm street, in front of the rebuilt structure where once stood the building that hosted the Berlin conference and later Adolf Hitler’s office.

The last day was a special day in Berlin because the yearly carnival of cultures was taking place. This is a multicultural event that brings together almost all the cultural communities from across the globe living in Berlin. The group first stopped to chat with Madam Agnes Fatima in her Afroshop situated near Hermannplatz.  She is the leader of the Ghanaian cultural community in Berlin. She revealed that her group has been existing since 2004, four years after the carnival itself started, with the major objective to bring Ghanaians in Berlin together, keep them in touch with their culture as well as export their culture to the world. Their major challenge, she said, is financing; though they receive some subventions from the Ghanaian embassy in Berlin. From here, the group accompanied Fatima to the technological museum area where the Ghanaian cultural group was getting set for the carnival procession. After exchanging with them for a while, the group also moved to the Nigerian platform animated by an Igbo cultural group where other interesting conversations took place. As the carnival procession kicked off, the group followed and watched the different performances.

Generally, the trip was both entertaining and educative for us; especially as it was our first visit to the capital city of Germany.  The different programs and guided tours were thus very helpful in satisfying our curiosity, especially about the former Berlin wall, life in the two Berlins then and how it shaped present day Berlin.