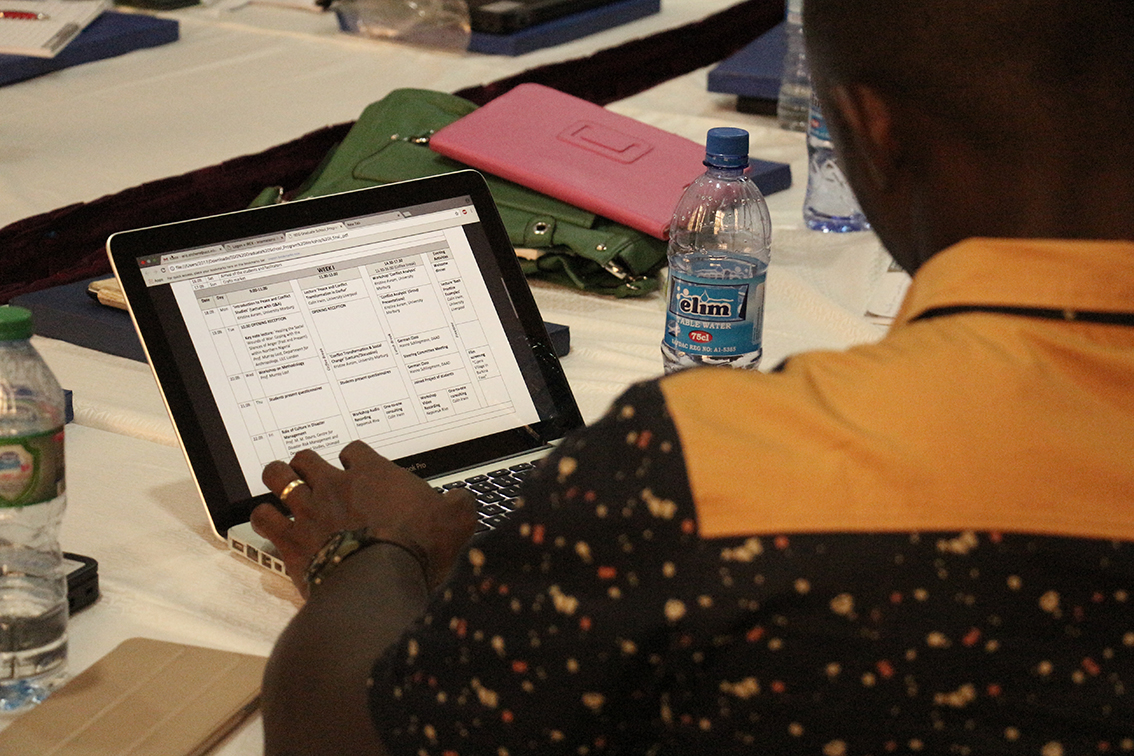 Betwixt and Between: Reflections on the Ethics and Politics of North-South Collaborations

I recently attended two international conferences together with other colleagues of the DAAD-funded SDG-Graduate School “Performing Sustainability.” The first was the biennial ASAUK conference, which took place from 11-13 September 2018 at the University of Birmingham. The second conference, held from 27-28 September 2018 in Accra, was to inaugurate the Merian Institute for Advanced Studies in Africa (MIASA), a newly instituted center at the University of Ghana that is supported with funds from the German Federal Ministry of Education and Research. For me, there was one particular theme that emerged from these two conferences which I thought was highly relevant in the context of our Graduate School and therefore worthwhile of critical reflection: The issue of the ethics and politics of North-South collaborations. In particular, there were two sessions that explicitly addressed this issue, a roundtable organized by Carli Coetzee at the ASAUK conference entitled “Ethical collaborations: North-South flows” and at the MIASA conference the keynote address “Incompleteness and Conviviality: A Reflection on International Research Collaborations in Institutions for Sustainable Governance” by Francis Nyamnjoh.

For the participants of the Birmingham roundtable, concerns about equitable North-South collaborations came specifically to the fore with recent changes in UK immigration policies and the tightening of visa regulations. It was observed that, over the years, visa applications of African scholars who wanted to attend conferences in the UK had repeatedly been turned down, sometimes on highly questionable grounds. One particularly disturbing example was the case of a senior African academic whose visa application was rejected on the grounds that her husband, a lawyer, had a professional engagement in the UK at the same time she wanted to attend the conference. Part of the roundtable discussion therefore focused on the question of how academic institutions in the UK (and in Europe more generally) as well as professional organizations like the ASAUK could engage policy makers and state authorities to overcome such discriminatory and outrageous visa practices. In a related development, the US-based African Studies Association (ASA) also recently launched a Task Force for the Protection of Academic Freedom to “defend and advance scholars’ ability to freely pursue, distribute, and discuss their research in academia and public life” (https://africanstudies.org/asa-news/fall-2018-asa-news/fall-2018-asa-news-new-task-force-for-the-protection-of-academic-freedom-launched).

Beyond external factors that militate against the fair, mutual exchange of knowledge, which are often already built into the funding schemes of agencies based in the Global North (the ultimate control over funds, for example, typically rests with the northern partners), the roundtable also brought up a number of issues concerning the internal power dynamics of North-South collaborations that negatively affect the production of knowledge. Power imbalances are often subtly reflected in the use of language, when African scholars, for instance, are labeled as ‘local’ while European and North American colleagues are referred to as ‘international.’ Another issue was what a discussant at the Birmingham roundtable called ‘piratic methods,’ devised to extract local knowledge to be exploited elsewhere, with little benefit for the communities that originally produced that knowledge. In this regard, as roundtable participants pointed out, academic publishing models still often disadvantage scholars and institutions in the Global South (and are ‘piratic’ in that sense), to the extent that scholars in African institutions might even find it difficult to access to their own books and articles.

So, how can we overcome, or, at least reduce, some of these power imbalances? As a starting point, Nyamnjoh in his keynote address urged us to disabuse ourselves from the idea that our relationships with institutions are purely rational. Factoring in the “complexities of being and becoming” and acknowledging our own as well as the incompleteness of our institutions would, as Nyamnjoh noted, bring about the humility needed for collaborative work on an equal footing. Nyamnjoh proposed the concept of conviviality to counteract existing structural injustices and systemic constraints that tend to perpetuate or, in the worst case, even further amplify inequalities. Convivial scholarship in Nyamnjoh’s sense amounts to nothing less than a new, decidedly anti-Cartesian, epistemology. As he elaborated elsewhere:

“Granted the intricacies of popular conceptions of reality, and in view of the frontier reality of many an ordinary African, nothing short of convivial scholarship would do justice to the legitimate quest for activation of African potentialities. A truly convivial scholarship is one which does not seek a priori to define and confine Africans into particular territories or geographies, particular racial and ethnic categories, particular classes, genders, religions or whatever other identity marker. Convivial scholarship confronts and humbles the challenge of over prescription and over standardisation. It is critical and evidence based; it challenges problematic labels, especially those that seek to unduly oversimplify the social realities of the people and places it seeks to understand and explain. Convivial scholarship recognises the deep power of collective imagination and the importance of interconnections and nuanced complexities. It is a scholarship that sees the local in the global and the global in the local by bringing them into informed conversations, conscious of the hierarchies and power relations at play at both the micro and macro levels of being and becoming.” (Nyamnjoh 2015, 16)

Nyamnjoh’s call for conviviality and the embrace of incompleteness as “the normal order of things” resonates with an issue pointed out by the participants of the Birmingham roundtable, which is the need to move away from the “deficit model” that pervades the logic of many funding initiatives. The deficit model is particularly pronounced in aid-based funding structures, where the boundaries between research collaboration and development aid are not always clearly demarcated. The rhetoric of research funding based on an aid logic is well known, often encapsulated in key terms and phrases like ‘capacity building’, ‘strengthening of institutional structures’, ‘infrastructural development’, as well as ’sustainability.’ The underlying premise of this model is that the ultimate goal of North-South collaborations is to fill a void; the assumption, in other words, that the northern partners have what the southern partners lack. In contrast to this and to enable truly ethical collaborations, as both Nyamnjoh and the participants of the Birmingham roundtable stressed, the starting point should, however, not be the question what African institutions and partners lack, but rather what all partners, both European and African, can positively bring on board, acknowledging that all are necessarily and inherently incomplete and that the ultimate objective is not to strive towards completeness but towards mutual enrichment through a multiplicity of perspectives.

On a practical level, this is of course not always easy to achieve. In order to access funding one has to meet the requirements set by funding agencies, which typically includes the adoption of their terminologies and terms of reference. Particularly for African partners this can be a dilemma, because for them funding options are much more limited, often leading to a take-it-or-leave-it situation with no real alternatives. In practice, partners in North-South collaborations are therefore often forced to engage in what we may refer to as (mild) intellectual schizophrenia, employing one rhetorical strategy in selling their project externally to funders and others while internally engaging in various forms of counter-discourse. For African intellectuals, this kind of ‘double consciousness’ is of course nothing new (Gilroy 1993), but I think it is of crucial importance to fully understand and appreciate this predicament for European partners as well.

Towards that end, more exchange at all levels and prolonged stays in each other’s institutions are certainly helpful, making mutual understanding and an appreciation of each other’s incompleteness—to use Nyamnjoh’s term—easier. Related to this, another practical suggestion how partners in North-South collaborations can create more equitable and ethical conditions among themselves that emerged from the Birmingham roundtable is to seek collaborations on multiple levels, including co-supervision, co-evaluation, co-publication and generally the reciprocal involvement of partners in each other’s institutional structures and processes beyond the immediate objectives of the project at hand. In all this, it is important that partners from the Global North participate in the structures of the Global South as much as vice versa (e.g. publishing in each other’s institutional journals, serving as assessors and examiners, etc.)—keeping in mind that there are multiple ‘Norths’ and ‘Souths’ and that hierarchical power relations also exist between institutions on the same continent and even within the same country. While such measures will certainly not completely erase existing inequalities, we can at least hope that the recognition of each other’s incompleteness will in the end foster greater mutual understanding and respect, which should, after all, be the ultimate aim of any collaboration.

Nyamnjoh, Francis B. 2015. Incompleteness: Frontier Africa and the Currency of Conviviality. Journal of Asian and African Studies 52(3), 1-18.