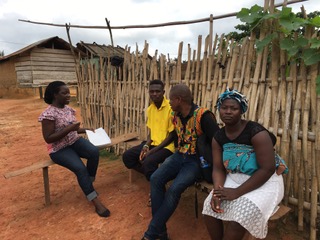 My internship at the National Peace Council (NPC) started on 4th June to 6th July, 2018. In the first two days, I was introduced to the staffs at the various departments. I got to know what role each staff performs in the institution. The National Peace Council is an independent Statutory national peace institution, established in the year, 2011 under Act 818 of the Parliament of the Republic of Ghana. The core mandate of the council is to prevent, manage, and resolve conflicts and to build sustainable peace in the country.

I was briefed on the current projects available. One of the current cases NPC has been working on is the issue of religious tolerance and freedom.  I was tasked to develop an instrument for data collection. I developed the instrument within three days and by the end of the week I arranged with the Executive Secretary and other department heads to finalize the instrument.  The outfit is currently waiting on government to release funds to collect these data and to inform policy on building peaceful co-existed among religious groups. The American Embassy is particularly interested in this study and ready to support the institution as well as I have engagement with representatives from Ghana chapter.

During the internship period, two of the staff went on study leave and I had to support the Human Resource and Programmes Manager to coordinate affairs of the office administratively.

I also developed a speech for the Chairman of National Peace Council, Most Rev. Prof. Emmanuel Asante to be delivered at the West African Parliamentary Peace Corps on the theme: Sustaining Parliamentary Democracy in the West Africa Sub-Region: The Role of the Media. The Chairman and Executive Secretary found the speech very unique and I felt proud of myself.

The National Peace Council has received clearance to recruit over 100 staff to work in various capacities including Director for Research and Programmes.  From my interaction with the Executive Secretary, my chances of joining their team is very high, hence I intend to put in application when the call is opened in order to strengthen their research department.

I want to thank SDG – Graduate School Performing Sustainability for equipping me with the knowledge, experiences, and exposure that have made me a good fit for all and sundry. I stand tall and proud wherever I find myself. Your financial support has gone a long way to make the impossible possible in my life.

Thank you, University of Hildesheim

Thank you, University of Cape Coast