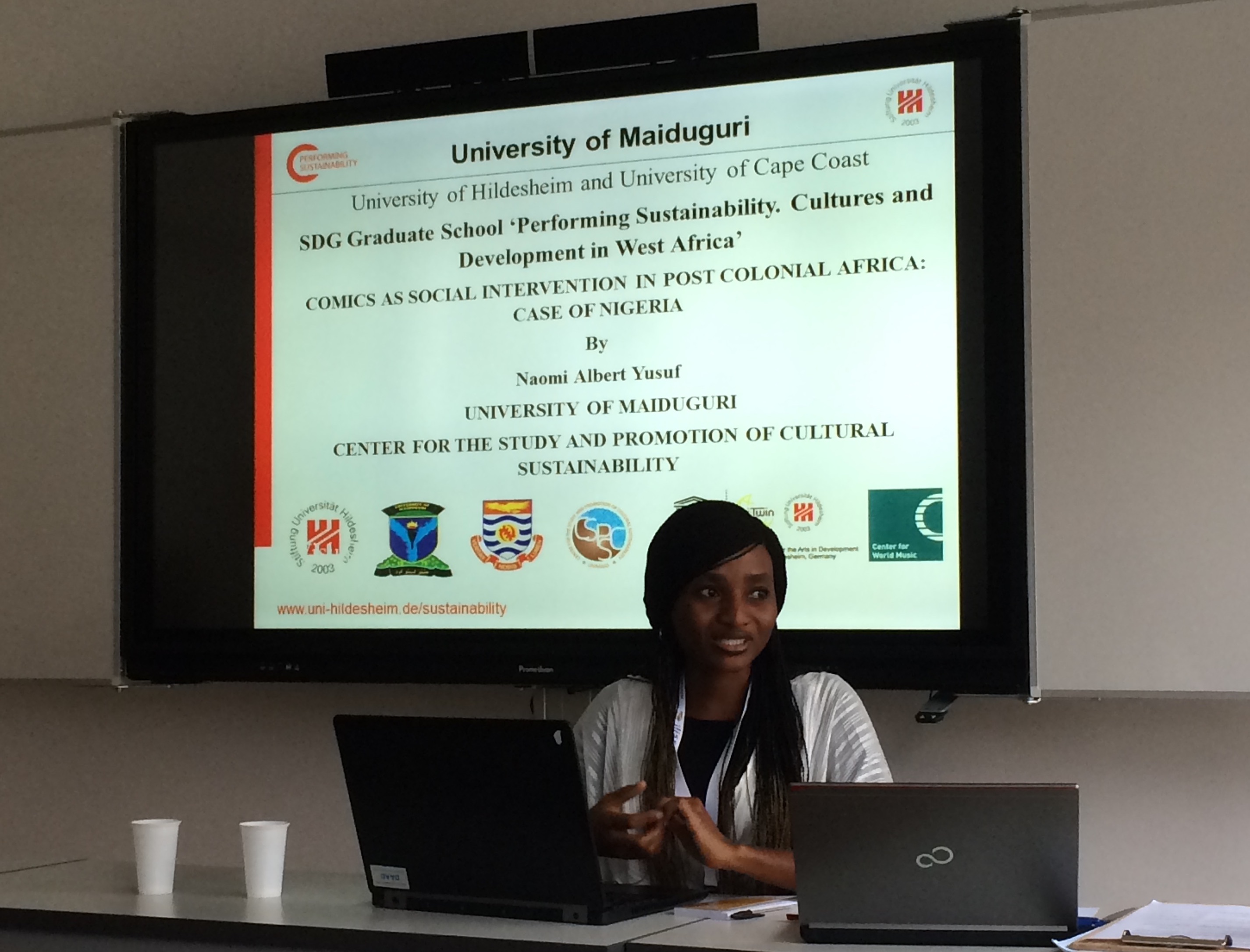 In June 2018, 6 scholarship holders had the chance to attend the ‘African Connections’ conference of the African Studies Association in Germany (VAD e.V.), taking place from 27 to 30 June 2018. The conference was hosted by the Institute of African Studies and the Centre for Area Studies at Leipzig University.

Before the interesting conference a young scholars meeting took place, focussing on the role and opportunities of digital tools in academic networking activities and academic research.

Presenters of the SDG Graduate School:

Africa and the World of Comics: Past and Present

Panel Abstract: Comics as a modern genre and modern European colonization emerged simultaneously in the late nineteenth century. It is no wonder that Africa has been the setting for numberless popular comics made in the ‘West’ ever since. On the other hand, African societies have integrated comics and caricatures into their visual cultures very easily and creatively. The panel attempts to investigate both, Africa and Africans in past and present non-African comics as well as Africa as the place of comic production and reception.
As a rule, comics use hyperboles and simplification so that they have had the power to generate and vulgarize stereotypes. In this regard, colonialist – or anti-colonialist – propaganda has been spread in cartoon strips. However, comic as a ‘global genre’ has also been used as a subversive instrument of critique and self-expression in and about Africa. Moreover, comics have always connected artists with colleagues and readerships from other cultures, because of the limited faculty of language required and due to the self-reflecting and self-referring nature of that genre.
In our panel, history will meet fine arts and Africanists from various disciplines in order to discuss Africa’s role in the past and present ‘World of Comics’. In this way, we will study the connectedness of Africa with the global sphere by processes of making, distributing, reading, and interpreting comics.

Land Use and Mobile Livelihoods: Intersectional Perspectives on Pastoralism, Migration, and Displacement

Panel Abstract: The interplay of land use and mobile livelihoods offers exciting perspectives to new and old forms of maintaining a living. Our specific interest lies in populations that are on the move. This includes pastoral communities, migrants, and people who have been displaced by development projects, nature, or civil strife. One can observe a transformation and yet continuation of mobile land use techniques like pastoralism (nomadic herding) especially in areas which are otherwise difficult to access or commodify. Migration patterns also influence local land use systems. Also, customary tenure systems change through individual members’ travelling strategies with implications for women’s land access and use rights. In the context of border crossing and reintegration of both voluntary and involuntary return migrants, access to land plays a vital role. So do internal migrants who often re-locate in search of farmlands. All of these issues are highly interconnected. Land acquisitions lead to massive migrations, displacements and sedentarization. Displaced pastoralists become migrants to the global North. Not only conflicts and civil wars can be explained by struggles over land but land ownership and land rights also play a pivotal role in peace building process and the repatriation and reintegration of refugees and displaced people.

Panel Abstract: Concepts and their corresponding terminology shape the relationship between researchers and their objects of investigation; at the same time they are constitutive of how we perceive of and know the world, how we connect to the world and configure boundaries. Yet the criteria and theoretical backgrounds of concept building have become increasingly contested. Paradigms of universal reason and its historical progress, of religious and metaphysical frameworks of finality, and also of political and economic ideologies have undergone crises of legitimation. Recently also science’s cogency appears to falter. Confronted with challenges to science and its forms of substantiation, we need to ask ourselves as academics how to approach this development: from which positionality and with recourse to which terms is it possible to analyse the loss of scientific persuasiveness when the methods of doing so are themselves subject to debate? Furthermore, how does the differentiating entanglement of conceptualizations of Africa and science contribute to and challenge these debates? Situated in global entanglements, the conceptual interventions from decidedly non-European perspectives (such as Postcolonial Studies, Theory from the South) are interwoven with requirements of theoretical frameworks to address the complexity of issues that span the globe. The turn to strictly empirical studies that subvert grand narratives coincides with enacted life designs that are oriented at the global. How are concepts related to the world and how do they form our understanding of it? How do scientific concepts create connections and configure boundaries within an African context? How do concepts orient our perception of reality and structure our practices? How are concepts malleable through time and space? If science fundamentally relies on concept making as its main instrument of cognizance, on what is such scientific conceptualization based and how does that feed back into conceptualizations of science and the world? Which power do concepts unfold in which contexts, in the name of which interest, and for whom?