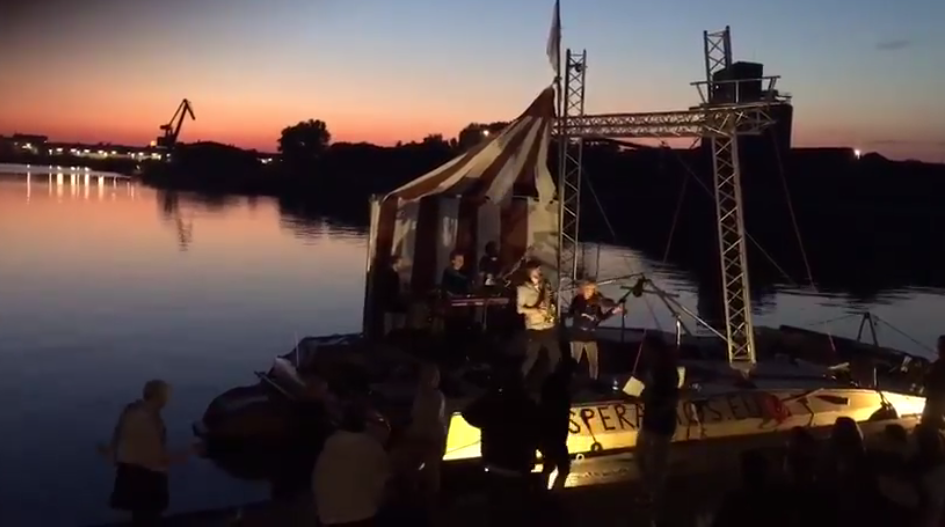 Boat Theatre in the Harbour of Braunschweig

This program was one of the programs that we were really anticipating. Seeing boat theatre on the program sheet gave us a lot of ideas like ‘Is it a theatre in a boat?’, ‘Will we travel on water?’ and ‘How will the whole program be like?’ In order for us to get answers for all these questions, we needed to attend the program.

21st May, 2018 was the day we went to the boat theatre “Esperantos” directed by Dorothea Lübbe. We went by train to Braunschweig, then a taxi to the harbour. We got to the venue for the program quite early so we had the opportunity to interact with some new people and old ones that we already knew. We were all anxious and waiting for the theatre to start. We saw a boat at the shore of the river. At the shore was grassed lawn where people were seated, waiting for the show to start. We soon realised that we would not be in a boat (which means we would not have to travel on water) but we will sit on grass and watch them perform in a boat. We were asked to get a place and sit because the theatre was about to start. In order to avoid boredom while watching the theatre, we bought some drinks and food at the venue to be taken while watching. The food and drinks were tasty and delicious.

The theatre started and the whole story was about cultural diversity. This was portrayed by the actors through their performance by acting as migrants from other countries and how they were able to survive in those countries. Three languages were used: German, French and English. A lot of the script was in German and French, with a little of it in English. Not using a lot of English during the performance made the whole theatre a bit difficult to understand for us because we were just watching their actions to interpret meanings. Although the student assistant tried to explain some of the things to us, some things were lost in translation. In spite of this, we got the message they tried to portray, which was cultural diversity.

After the theatre, we had an opportunity to interact with some of the actors and actresses who performed. We asked them a lot of questions about the theatre, how they met as a group, some of their challenges and many more. They took their time to answer all our questions. Then there was another part I really loved about the show. I will call this the climax of the show. There was a live band performance by the band Evelin Kryger from Hildesheim. The band brought life to the show because we had the opportunity to dance with old friends and new ones.

This day will remain a memorable one because we experienced theatre that was performed on a different stage other than the one we were used to. Issues like understanding people’s culture and the various diversity was dealt with clearly. We learned that we need to tolerate and help one another in all aspects of life.